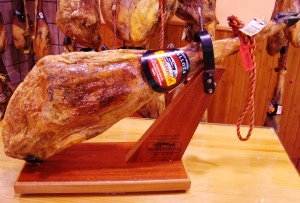 The Iberian Ham is one of the major products of the Spanish gastronomy. His production is handcrafted. The master of the ham takes care of every ham individually. Each animal must have certificate at least 50% of Iberian breed in order that the product could be called a “Iberian ham”.

This breed is characterized for living at liberty in the pastures, where the animals are in continuous movement and they are fed with acorns during the period of “montanera”.

The Iberian ham is distinguished from others for his smell, texture, and his unmistakable flavor. The flavor os the ham changes depending on the quantity of acorn that it has been eaten by each animal.

Any cookies that may not be particularly necessary for the website to function and is used specifically to collect user personal data via analytics, ads, other embedded contents are termed as non-necessary cookies. It is mandatory to procure user consent prior to running these cookies on your website.